Chief Michael Kallai, CLEE Barberton PD, where he spent his entire career, was a friend of the Ohio Association of Chiefs of Police and Law Enforcement Foundation. Chief Kallai passed away suddenly while on vacation with his family during the summer of 2010. Chief Kallai was a graduate of the PELC program, was active in the PELC Alumni Association, and several other committees in law enforcement. Chief Kallai graduated from the CLEE program in 2004 with CLASS IX and was appointed to the CLEE Advisory Board shortly after graduation. He was an active member of the Board, and in the middle of his second term on the CLEE board. Chief Kallai was a strong advocate for the CLEE program and actively worked on the board to strengthen CLEE and to ensure its stature for years to -come through his work to create a sound financial future.

Chief Kallai was also active in his community, serving as a varsity assistant wrestling coach at Wadsworth High School as well as being in integral part of numerous other community activities and events.

Following his sudden death, the CLEE board established the Chief Michael Kallai CLEE Award to be granted each year at graduation to recognize one of the graduates who performed exceptionally well in the CLEE academics as well as has an established record of community involvement, as did Chief Kallai.

Lt. George Lichman, II began his law enforcement career in 1997, and he joined the Rocky River Police Department in 1998. He worked his way up through the ranks and is presently a lieutenant. He received his Bachelors of Science degree in Public Law and Government from Eastern Michigan University. Like Chief Kallai, Lt. Lichman is active in his profession and his community.

His Professional Service includes serving as an assessor for promotional exams and being a member of the International. Law Enforcement Educators and Trainers Association. His Community Service includes serving as a trustee for a trust that provides healthcare benefits to retired Ford automakers in Ohio and Michigan, serving as the liaison to the Rocky River Citizen Police Academy Alumni Association, and being a member of the City Club of Cleveland.

Captain Bryan Snavely began his law enforcement career in 2000 with the Stow Police Department. He also works his way up the ranks and currently serves as a captain. He received an Associates of Arts degree in Criminal Justice Studies from Kent State University.

Captain Snavely is also active in his profession and community. His professional service includes serving on the board of the Summit Metropolitan Police Explorers, the Metro Falls Citizen’s Police Academy, the Akron Area Narcotics Overdose Prevention Education Task Force, and also as an assessor for promotional exams.

Captain Snavely is active in his community as well serving on the board of the his church and also as a volunteer for the Stow-Monroe Falls Rotary. 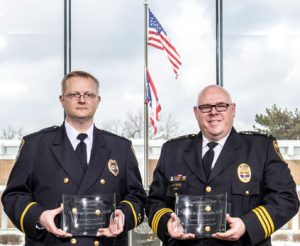 Commander David Blake Griffith, Jr.  began his law enforcement career in 1993 with the Columbus Division of Police.  Starting as a patrol officer, he advanced up the ranks, serving as a sergeant and lieutenant in many varied operations, including Internal Affairs, Accreditation, Drug Enforcement Investigations, and research and development. This year, he was promoted to Commander in charge of Patrol Operations for a zone.  He holds a Masters’ in Business Operational Excellence from The Ohio State University, and he is also a Lean Six Sigma Black Belt. Prior to his career in law enforcement, he was a staff sergeant in the United States Air Force Reserve.

Commander Griffith has been active in his community participating in the First Responder Face Off Ice Hockey events that raises funds for local charities. He also is a member of Habitat for Humanity, Hockey for Humanity program, a grueling 24-hours of hockey event fund-raiser. 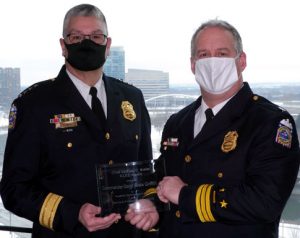 Dr. Ray A. Miller served as the program director for the Certified Law Enforcement (CLEE) program for ten years (2004-2014).  He passed away in June 2014 after a two-year courageous battle with leukemia.  Dr. Miller exemplified the core values of CLEE throughout his highly accomplished life. He was a strong believer in giving to the community. He was an active member of his church and of The Ohio State University Alumni Association.  His contagious smile and affirming pronouncement that “Life is Good!” touched so many in the law enforcement community and beyond.

The CLEE Advisory Board developed the Dr. Ray A. Miller Alumni Leadership Award to be given annually at the Chiefs Inservice/Annual Conference to an active CLEE graduate who has demonstrated exemplary leadership in his local community and to the law enforcement profession.